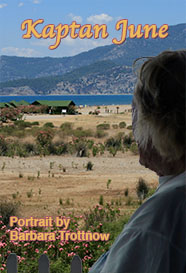 June Haimoff lives since the mid-eighties in Dalyan (Turkey) and is involved there in the protection of endangered sea turtles. When on their nesting beach a hotel should be built, she launched a global campaign, successfully, the hotel was not built and the Iztuzu beach is now part of a Special Protected Area. On site they all call her ‘Kaptan June '. Before the Englishwoman stayed in Dalyan, she sailed with her boat through the Mediterranean. In December 2012, she celebrated her 90th birthday, but full of energy she continues to fight for the protection of the environment. Three years ago she set up a foundation, which is committed to preserve the natural habitat of sea turtles and to protect them from the effects of tourism. Since every year more and more tourists come to the beach. Most of them are day-trippers, intent on seeing some supposedly untouched piece of nature. The number of boats that offer trips to the ‘Turtle Beach' has grown constantly. Kaptan June's Foundation now offers all captains to provide the propellers of their boats with a kind of protective cage so the turtles are not injured. Barbara Trottnow knows June Haimoff for 22 years, from the material collected since that time and several long interviews a personal portrait is created, which appreciates her engagement. The film is the first module of a cross-media project comes with different media and from different points of view on how negative consequences of tourism can be limited. [next page]

In 1984 June sold her boat and spent three summers in a hut on the beach. She calls that time the best days of her life. Then she was the only foreigner, the other huts belonged to locals. In order not to disrupt the upcoming tourism, the huts were banned, and June moved to Dalyan, about 10 km away. She brought her beach hut with her and put it in her garden. But a few years ago the hut was returned to the beach and became a museum where Kaptan June’s story is told. There volunteers also inform about current problems. By selling souvenirs, the Kaptan June Sea Turtle Conservation Foundation’ raises money for its projects. With the help of the media, Kaptan June, conservationists from around the world and some locals have prevented building on the beach, in the late eighties. Today, the beach is closed at night, so the turtles can lay their eggs undisturbed. And there is only a small café on each side of the beach. But instead, the building boom began in the nearby Dalyan. When June came, only a few fishermen and cotton farmers lived there. Today Dalyan is one of the most famous tourist spots in Turkey. June is not satisfied by the protective measures. For her, there are now far too many sunbeds and umbrellas on the beach. This restricts the area where the turtles preferably lay their eggs. She is particularly shocked about the boat trips where turtles are fed in order to show them to the tourists at close range. [next page] 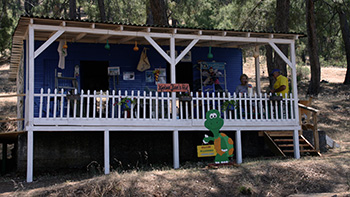 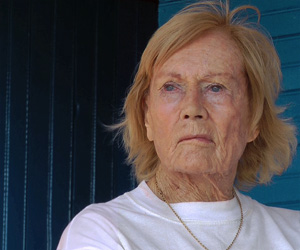 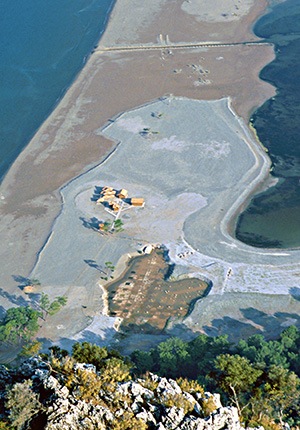 When Barbara Trottnow 1991 first came to Dalyan, an abandoned excavation could be seen on the beach yet. A hotel with 600 beds was planned, a Turkish-German construction project, supported by German development aid. June played an essential part in ensuring that the hotel was not built. But the beach never returned to the unspoiled state it had been before. The foundations were filled in and now serve as a car park. In 2002 Barbara Trottnow filmed in Dalyan the documentary "Kadir – the cotton farmer“, where June also gave an interview. Kadir saw no future in growing organic cotton and started ferrying tourists to the beach, who wanted to see the ‘rescued paradise'. In other films, a book and an interactive website, the author will indicate the changes tourism has brought to a place, where many things already were done right, but it nevertheless needs to be protected further. The focus of this film, however, is on June Haimoff, who describes impressively, what happened to her when she watched a turtle laying eggs, and how fascinating she found this beach from the very first moment. And she tells, which ideas she has for the future. Soroptimist International Club of Mainz supported the film. Additional Info: Kaptan June's Foundation